Every once in a while auto company authorities let their engineers and working staff to go crazy with their ideas. From building the fabric car to inventing wild designs, these company heads pride in the unique creations. The concept cars give us a look into the future.

The Bugatti Type 57S was designed especially by Jean Bugatti in the 1934 till 1940. The best built cars by Bugatti, the Atlante was named after the huntress and princess of ancient Greek mythology, Atlanta who swore she would only marry the man who could run fast enough to catch her. 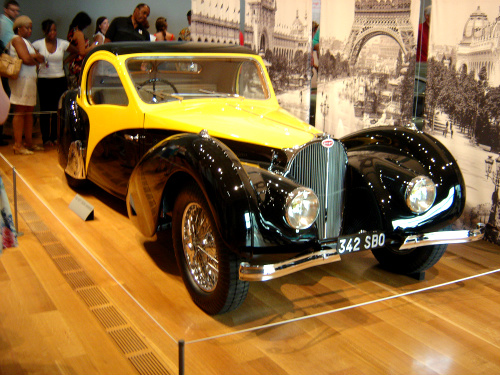 The Type 57S with its Atlante body style was a slightly large car with a more comfortable interior. The Atlante was built as a two door coup with a single piece windscreen and no fin. Bugatti made only 17 of the Atlante Type 57S cars, therefore making the Atlante the most temperamental, technically complex and very expensive of the Bugatti cars.

The open top, two seat Roadster concept was unveiled in 2009. The MINI has decided expand its model family, and the Roadster is all set to be released next year in 2012. The sixth model in MINI’s current line-up and first of the open-top two-seater in its history, the Roadster will have its own unique features – the soft top, a steeply raked windscreen, stainless steel roll bars and an active rear spoiler that can set out at 50 mph. 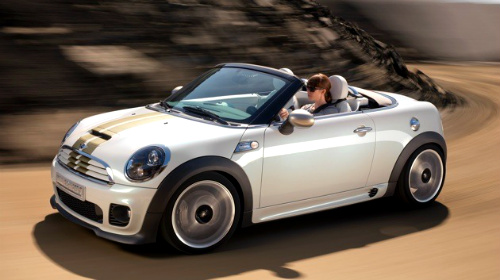 One look at the Roadster will tell you that it’s a MINI thanks to the hexagonal outline of its radiator frame, the black border about the lower part of the body, chrome trim bands and borders, large spherical headlights, vertically stacked rear lights positioned on the rear end at outer extremes, and the eye-catching surrounds of the side indicators on the front side panels. The MINI Roadster is self inviting with its exciting management fuelled by powerful engines and sophisticated chassis technology; unrivalled scope for personalized style.

BMW brought out a great concept car but that was never to be implemented, the heads of the BMW let their engineers’ imagination run wild when they allowed the GINA concept to be implemented. Made out of fabric, the shape-shifting car is something that BMW believes to be the vehicle of the future. 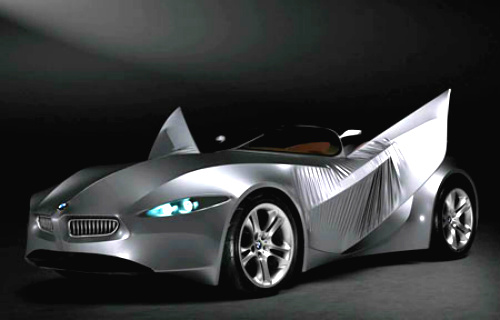 Dressed in a lightweight frame chassis, the BMW shape-shifter concept was unveiled in June 2008. The head of design at BMW, Chris Bangle said that the GINA allowed his team to “challenge existing principles and conventional processes.”  Although the people and the governing bodies are skeptical that the GINA will provide all the safety of a conventional car, the BMW officials sound positive about GINA’s future.

The 2012 model car, the iMiEV is an electric vehicle (EV) by Mitsubishi. The affordable and efficient car concept was show cased in the 2003 Frankfurt Motor Show and became an instant success with the show attendees as well as the media. 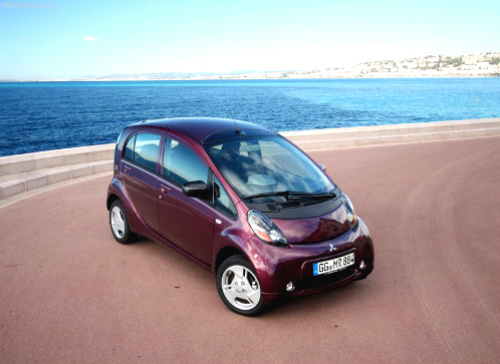 The car was first made public in 2006 in Japan, and soon became popularly known as the “little big car” throughout Asia and Europe. The iMiEV is a light vehicle powered by a tiny 12-valve, 659CC DOHC inline-3-cylinder engine that featured Mitsubishi Innovative Valve timing Electronic Control system, which is the Japanese standard for maximum power and fuel efficiency.

The latest concept car by Toyota, Long Beach Racers Tacoma was exhibited at the 2011 SEMA Show. Toyota will be unveiling the limited edition Tacoma TRD T in 2012. However, for all the impatient Toyota lovers, Long Beach Racers have unveiled their Tacoma package which is inspired by the Baja Series pick up. 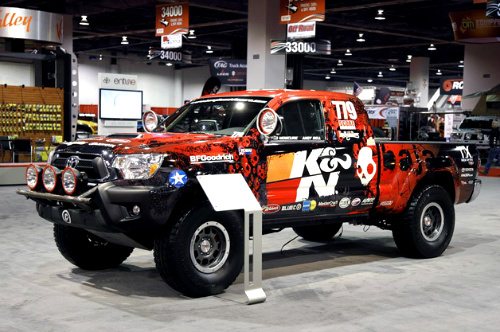 The Corvette Carlisle Blue Grand Sport concept is one of the two concept cars of Chevrolet that were unveiled in the 2011 SEMA Show. The Chevrolet concept Carlisle Blue exterior, new Silver-painted Torque 2 wheels and Pearl White full-length racing stripes. The sports model out performed all the other concept cars at the 2011 SEMA Show with its dual-mode exhaust and Magnetic Selective Ride Control. 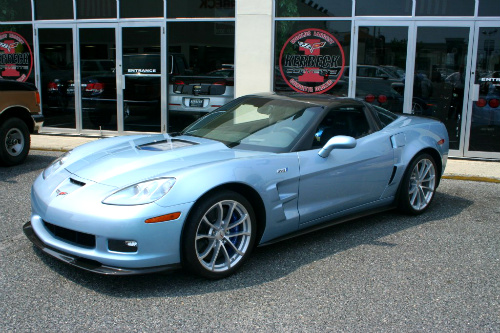 The third generation of Camaro, the 1LE concept was showcased in the 2011 SEMA inaugural awards and came to be known as the Hottest Car. The road racing car concept is derived from the Camaro SS and upcoming Camaro ZL1. 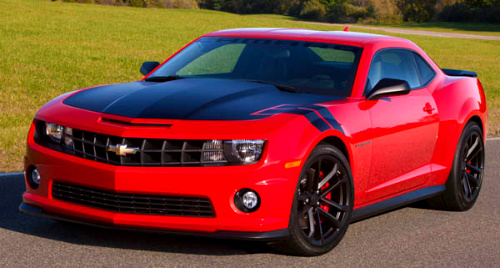 The car has a red exterior and hash marks with a flat black hood has a satin black splitter, rocker panels, rear spoiler, outside mirrors, suspension featuring Magnetic Ride Control and an electric power steering. There are six-piston front calipers, with two-piece front rotors, and four-piston rear calipers with dual exhaust outlets with ZL1-style active exhaust and diffuser. Although the 1LE concept combines two of the best Chevrolet cars, but it is just a concept as there is no hint that the auto company will make it public. 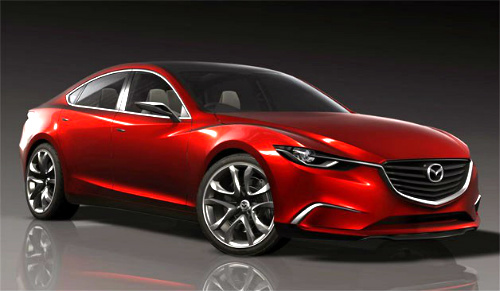 The Takeri portrays the new Mazda concept, which contains the 2.2 liter twin-turbo four-cylinder SkyActiv-D diesel engine with a lowered compression ratio for 20% enhancement in efficiency over a conventional oil-burner. The Takeri with its stop & start engine management and regenerative braking is a revolutionary change brought by Mazda in the world of autos.

A car that is said to stand apart, the new Maxima is a unique model by Nissan. With its new front grille, redesigned taillights, wheels with a dynamic design that are available in 18 and 19 inch sizes, the interior of the Maxima is spacious with enhancements that include a new white colored meter cluster illumination, new Dark Piano-hairline trim, a new Atlantic Cherry wood tone trim and a Cafe Latte interior color. 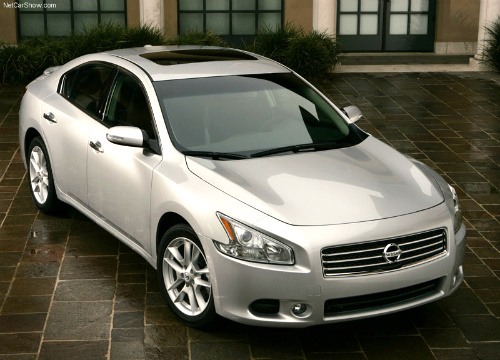 There's also a new audio segment display and new audio/HVAC knob design. The design has two different colors – Java Metallic and Dark Slate, available for the body of the concept car. These colors will be offered in 2012 version of the car.

Presented at the 2010 Geneva Motor Show, the concept car Sophia was presented by the IDEA Institute. The car got its name from the actress Sophia Loren, paying homage to Italian elegance and feminity.  The concept Sophia is a four door and four-seater car, with an exterior inspired by traditional sports car. 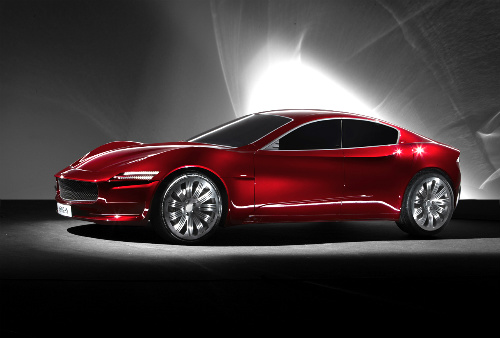 The car is designed with large dimensions and a relatively low stance with smooth and flowing lines. The concept of the Sophia was developed in 2007. The car comes with Monocoque Chassis – M2 segment, transversal-mounted V8 Engine, and power output up to 400 hp. The transmission contains manual/sequential six speed gearbox / front or rear wheel drive and Lithium-polymer batteries.