Have you ever imagined being in the range of an atomic bomb? I guess not, as nobody would love to be melted down to the last bone. Not surprisingly, some of the most powerful atomic bombs are being made these days. But in the never ending race of the nuclear weapons, the scientists have now realized what unleashing atomic bombs and energies could mean. One of the founding fathers of the atomic bombs and nuclear technology, Albert Einstein had showed his concern about the future of these technologies in the letter he had written to President Roosevelt. Here I would be sharing with top 10 most powerful atomic and nuclear bombs.

You might have heard about this atomic bomb which was dropped by the United States of America on the Hiroshima, Japan. It was the first ever atomic bomb to be dropped on a human population. Little Boy is more like a code name for this project. It is also the second artificially made nuclear explosion in the history of mankind, the first being the trinity tests. More than 100,000 civilians were killed by the explosion of this bomb in a matter of a few seconds. 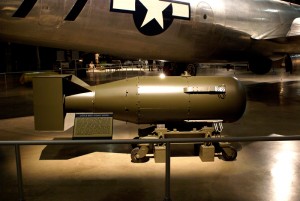 Fat Man was in fact the code name of this atomic bomb which was yet again used by the United States against Japan. It is also one of the two most devastating atomic bombs to be used in history. Detonated deliberately on the city of Japan, Nagasaki, the bomb had killed more than 50,000 people at the very instant and had injured more than 30,000 civilians. The actual numbers are also believed to be much more, although the U.S authorities never accept it.

You might have seen or heard about the notorious mushroom cloud which is generated after a nuclear explosion. A similar cloud was also produced after the testing of this thermo nuclear device. The bomb which was used in it was known as a staged fusion bomb. The site which was used in the testing was the area of Enewetak located in the Pacific Ocean among a number of islands. It was purely an atmospheric explosion which was yet again done by the same country. 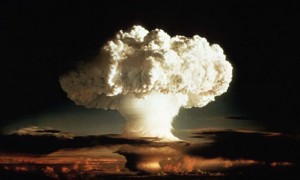 Code named as operation Hurricane, this bomb was the first ever atomic device to be used by the United Kingdom. It was tested in the year 1952, making use of a number of plutonium implosion device. The land area which was used for the execution of the bomb was Montebello Islands. In terms of nuclear explosion it was quite similar to the Fat Man Atomic Bomb. 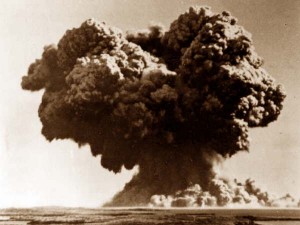 Produced in the year 1955 by the United States and known as one of the most powerful gravity bomb, the Mark-21 was detonated in the year 1954. It was a part of the nuclear tests that were carried out under the name of Operation Castle. The Mark-21 was nearly 15 feet long and weighed more than 15,000 pounds. The yield of the bomb was nearly 4 megatons. Furthermore, it was only one of the mo

st dangerous atomic and nuclear weapons which were produced at those times. 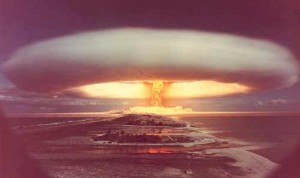 Now here we have the bomb which was one of the most heaviest and high yield nuclear bombs ever to be made by the United States. The making of Marl-36 was based on a number of thermo nuclear devices and chain reaction designs. It was so powerful that it was easily able to produce a yield of nearly 10 megatons. The estimated weight of the bomb was nearly 1700 pounds or more. What’s more horrifying is the fact that the makers had modified all the previous Mark-21 bombs into the Mark-36 nuclear designs. Furthermore, a number of variants of the bomb were also produced.

What made this bomb different from all others is the fact that it was the first hydrogen based thermo nuclear bomb to be ever tested. The detonation was carried out in the year 1954 at the Marshall Islands. It is also asserted this bomb was in fact the most powerful nuclear and atomic device ever to be exploded by the United States of America. The yield of this first ever hydrogen bomb was nearly 15000 megatons. Furthermore, a significant radiological contamination was also caused as a result of this testing. 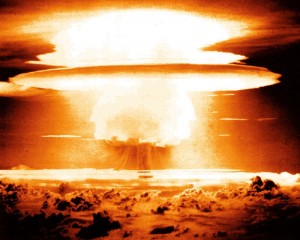 One of the most high yield bunker buster and nuclear based weapon, the B-53 was developed in times of the cold war. It was manufactured by the United States Atomic Energy Commission. Nearly 340 of such bombs were made which remained in service till the year 1997. The design was later on modified into some even more powerful atomic bombs. 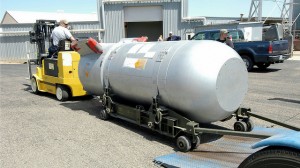 Deployed by the Strategic Air Command, this thermonuclear weapon was tested in the early 1960’s. It was much more powerful than its predecessors weighing more than 25 megatons. It was prepared for the time of the cold war. The fuel which was used in the bomb was lithium-6 enriched and a powerful fission jacket. 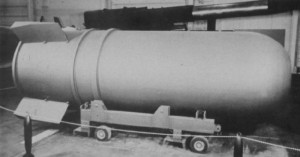 At number 1 we have the Tsar Bomba which is the most powerful atomic bomb ever to be exploded in Human History. It was also named as Kuz’Kina Mat, all because it was made by the Russian Federation. The yield of this nuclear weapon made use of nearly 100 megatons TNT and 50 megatons of yield. The idea here was to carry out a safe detonation which proved to be quite successful. Till now Russia has also produced a number of nuclear weapons having the first name of the Tsar Bomba. 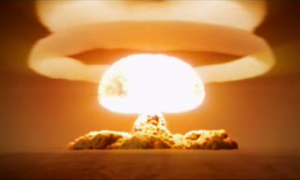