Mental disorder has always had its share of fear and stigma which is still evident in the walls of many asylums. The abandoned buildings have their tales of being haunted by the ghosts of their past. More so when we realise that the once inhabitants had been declared to be clinically insane by the society. Having been inhabited by the mentally challenged, their bad memories magnifies within the walls of the architecture. Yet asylums stand still to great character, rare solace, and irresistible magnetism for urban explorers. The era of old lunatic asylums is over as many of the modern psychiatric hospitals were closed down during the late 20th century, as the British society shunned the practice of isolating people suffering from mentally illness in secure institutions. The Care in the Community Act of 1980 has marked the transition in the way these people are being treated. We are showing you the ten creepiest yet most fascinating abandoned asylums in the UK.

Deva Asylum lies in the grounds of the still-in-use Countess of Chester Hospital but now it is abandoned. It started operations in 1829 and was originally designed by William Cole Jr. to house 500 patients and expanded with new annexes until it could finally hold over 1,500. It officially shut its doors in 2005 and since then it has been exposed to the forces of nature. Some sections look like they are still in use. 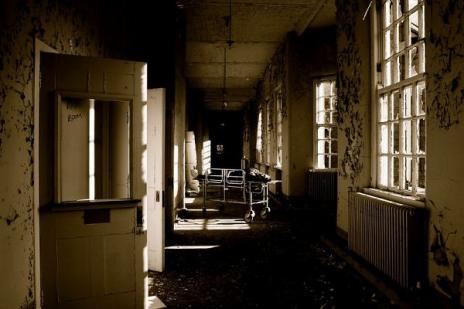 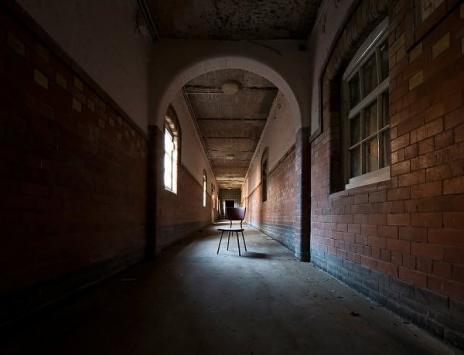 Deva has been beautifully preserved though not in use anymore. Many parts have their power and water supply still intact and even the cramped rooms, labs and pharmacy is in good condition. The asylum also housed the legendary hazard room painted as an art piece a few years back. The high security seclusion cells and an intact dentist’s chair tucked away deep inside the bowels of the service tunnels gives the illusion of the asylum’s functioning.

One of the largest asylums in the United Kingdom it was built in 1869 on the designs of Henry Littler in the woody grounds of Lancashire. During its heyday the asylum's main building and annexes housed 3533 patients and 548 staff. It had its own farms, telephone exchange, post office, reservoirs, gas works, orchestra, brass band, butchers and brewery and even a railway station. It was a model of a self-contained asylum. It pioneered the use of EEG, the recording of the brain’s electrical activity. 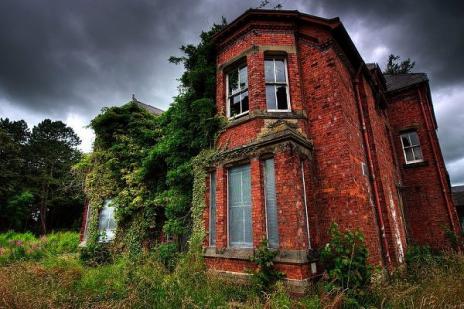 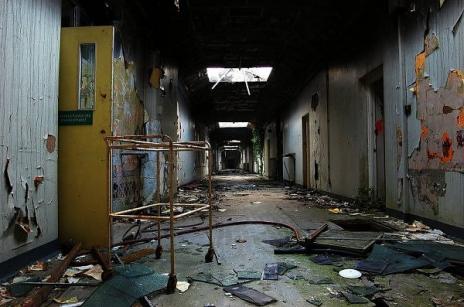 The military had taken over the asylum during World War I and II but this giant institution decayed as large institutions fell out of favour with the Mental Health Act of 1960. It had its fair share of controversies as allegations of abuse against patients led to a public inquiry and many of the staff members were dismissed. Patients were given new therapies and relocated during the ’70s and ’80s and the final curtain was pulled in 1995. Since then this site has been in a bad state of disrepair and one section has been flattened but there are plans for redevelopment.

St. Mary’s Asylum in Northumberland lies in an isolated location whose decay hasn’t erased its past. The chapel, superintendent’s residence and main entrance remain almost intact. GT Hine had designed the asylum which draws inspiration from Hellingly and opened its gates to patients in 1914. It was soon taken over by the army during World War I. The isolation hospital was modified to form a sanatorium for TB patients and again it was taken over by the forces during World War II.

There have been proposals to redevelop St. Mary’s but the buildings narrate the story of a bygone era which are on the lips of a few occupied staff residences. The Grade II listed buildings have remained in remarkably good condition, probably because of their remote location. The boiler house chimney has collapsed due to structural failure and its emergency medical huts were demolished prior to the hospital’s closure in 1995. The equipment from inside the hospital is missing.

One of the main attractions in the St. John’s Asylum is the imposing water tower. The Lincolnshire asylum built by John R. Hamilton welcomed patients in 1852. It also features a freshly restored façade but the interiors have a different story to tell altogether. It was initially built to accommodate 250 inmates but was later extended to house more. The inmates had to cultivate the grounds, provide vegetables and dispose sewage. Ironically they were called visitors.

The asylum was shut down in 1989 and fell into the hands of the developers who have converted half of the site into houses. The main building survived owing to its Grade II which protects it from demolition. Most of the rooms in the building have been stripped bare but the Y-shaped stairwell still attracts attention so do extremely cramped cells lining the long, barren corridors. St. John’s formerly had its own cemetery together with chapel and mortuary but all the three don’t exist anymore now.

The name has a hell in it to make you feel scary about the place. The asylum is on top of a hill overlooking the East Sussex countryside and reminds visitors of a grand psychiatric hospital that stood there once. The asylum was built by GT Hine, who was one of the most esteemed asylum architects of his time and opened its doors in 1903. The building epitomised splendid isolation philosophy which was evident in its design. It boasted of its own tram and railway. 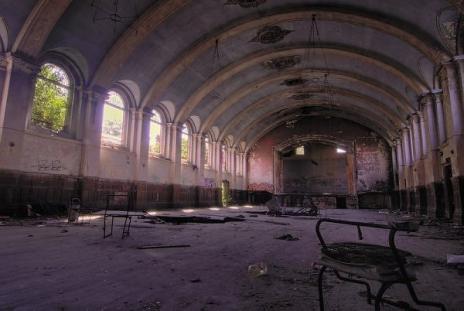 Hellingly’s decline started in the 80s and the asylum was finally closed in 1994, after which it grew increasingly run-down and suffered attacks by vandals, and arson. The asylum was almost isolated until recently but now the contractors have started stripping it and razing it to the ground. But it has been a sense of attraction for the urban explorers who have been visiting its grounds, laundry, patients’ shop, sewing rooms, water tower, large boiler house and inspiring ballroom.

A perfect example of Victorian asylum architecture, Denbigh Asylum in North Wales is a magnificent structure. The interior of the asylum is rotting but it appears to be daunting to the onlookers. Thomas Fulljames had drawn up the plans for the asylum which was built between 1846 and 1848 to solve the problem faced by the Welsh people with mental problems. It originally houses 200 patients but was extended having housed 1500 patients in its peak in 1956. 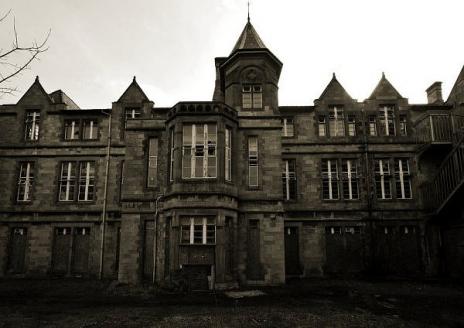 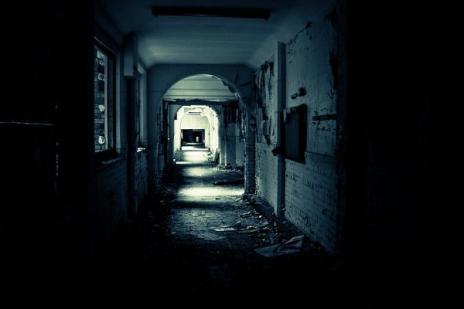 The institute was finally closed in 1995 and limestone Grade II listed building was left to ruins. The building was surrounded by acres of wooded, landscaped grounds originally donated by a local landowner. Denbigh’s demise has been fuelled by vandalism and other human activities with its machineries being stripped and smashed to pieces. The floors have also started rotting making navigation difficult if not dangerous. The morgue however remains intact.

The sprawling West Park Asylum complex houses red-brick buildings which radiate out from idiotically the burnt-out shell of its central hall. The asylum was designed by William C. Clifford-Smith, and opened in the 1923 after use during World War I and was one of the last psychiatric hospitals in the London area. It was built to the American ‘colony’ plan, with wards clustered together in the same building, creating isolated communities. In West Park Asylum each building linked to the others via a web-like maze of corridors. 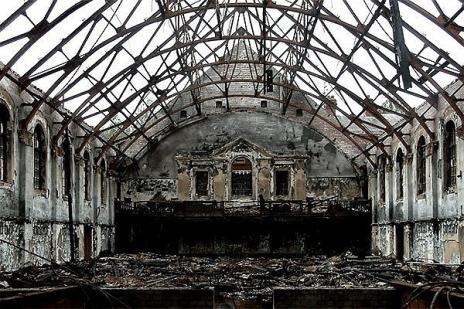 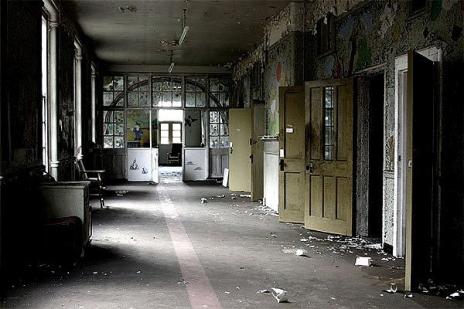 The asylum housed up to 2000 patients of mixed class and so needed to be large, with enormous kitchens and extensive boiler houses and plant rooms. Its decay started in the mid 90’s but it remained functional till 2003. The impressive buildings are getting ruined with only a few outer wards still in use. Urban explorers are still able to see patients’ belongings still strewn around, hospital items like beds and equipment, and even a padded cell.

One of the biggest asylums in the United Kingdom Severalls Asylum is spread over 300-acres. At its peak the asylum housed 2000 patients. It was designed by Frank Whitmore and opened in 1913 and built according to the ‘echelon plan’ where buildings are linked to one another by a network of interconnecting corridors which allowed staff to move around freely in bad weather. Built in Edwardian style the building still stands though it has been closed way back in 1997. 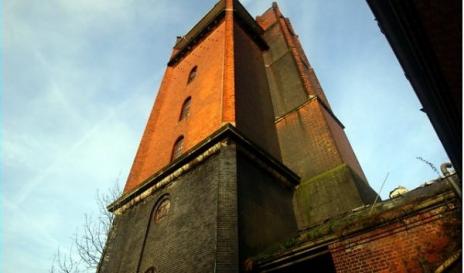 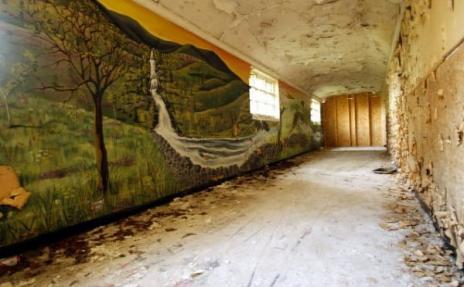 Severalls was one of the rare asylums where psychiatrists were free to experiment on patients using treatments now considered inhumane. Most patients we administered electro-convulsive therapy and frontal lobotomy – before reforms were introduced in the ’60s. The buildings have suffered vandalism and fire attacks, leading to the demolition of the charred main hall in 2007 but people are still attracted by its past.

High Royds Asylum dominates the surrounding West Yorkshire landscape with its 130-ft tall clock tower. It looks anything but an asylum which is a stunning piece of architecture replete with Italian mosaics and elegant tile work. This 300-acre Grade II listed site has been compared to a palace rather than a psychiatric institution. The building deteriorated in 2003 but is being re-developed for housing. 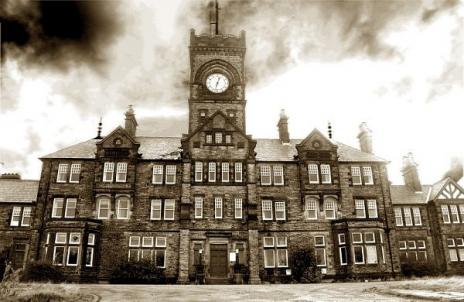 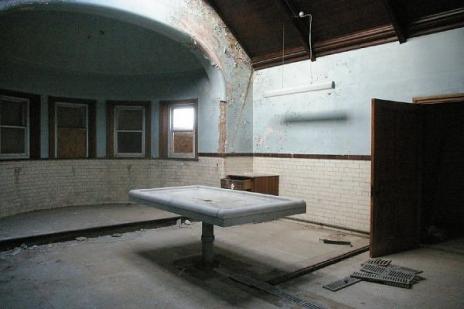 High Royds opened in 1888 as the West Riding Pauper Lunatic Asylum and was designed by J. Vickers-Edwards and is arguably the finest example of a broad arrow layout. The self-contained High Royds formerly boasted a library, surgery, butcher shop, dairy, tailor, sweet shop, bakers and cobblers as well as its own railway system. At its peak High Royds could house 1,300 patients.

Situated in Croydon, Greater London the once busy asylum lies totally flattened with the exception of its huge chapel and water tower. The boiler houses, mortuary and tunnels were once legendary to those fascinated by abandoned places in UK. The asylum was demolished in July 2001 after arson damaged the structure which took a heavy toll. The asylum which opened in 1883 housed 2000 patients in its peak. 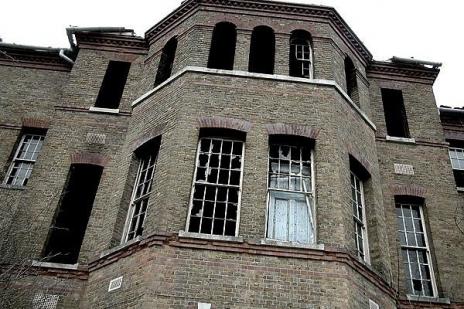 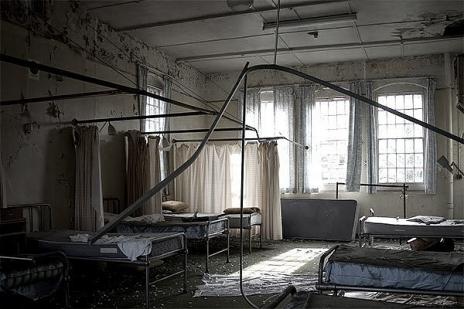 Charles Henry Howell designed the main buildings which had a Latin motto that translates: ‘I bring relief to troubled minds’. Irrespective of what the motto or the institute achieved, in its heyday Cane Hill was held as an example for the treatment of the mentally ill. The Victorian asylum remained largely untouched until the ’60s but lost its sheen after Health Minister Enoch Powell called for the closure of the asylums.  The closure started in 1991 and by 2008 it was completely shut down.