More than 5,000 years ago, the Nile River gave birth to one of the greatest civilization in the history of the world – Ancient Egypt. Ruled over 3,000 years by kings called Pharaohs, the Egyptians crafted intricate artwork, built great stone monument and developed the world’s first national government. They created the first form of the 365 day calendar and a kind of writing called hieroglyphics, leaving behind a record of their world in words as well as in stone.

The ancient Egyptians built great tombs, many of which still stand today. But the Egyptians were not obsessed with death; rather they were so in love with life that they wanted it to go on forever. And so created tombs for they believed in immortality.

The Mortuary temple of Hatshepsut is basically a tomb built for Queen Hatshepsut, who reigned over Egypt from 1479 BC to 1458 BC. The temple is located beneath on the west bank of the River Nile, on the cliffs at Deir el Bahari near the Valley of the Kings. 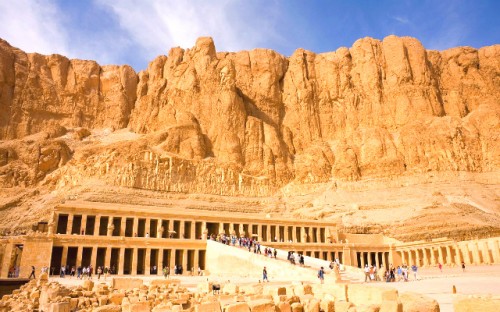 The temple was built under the observation of Queen Hatshepsut’s chancellor, royal architect and possibly her lover Senemut. The temple also honored the glory of Amon-Ra, the Egyptian sun god. The structure of the temple is heavily colonnaded and is built into the face of a cliff that rises sharply above. The Temple of Hatshepsut consists of three layered terraces of 30 meters height. The terraces are inter-linked by long ramps and were once surrounded by gardens.

Located at the royal necropolis of Dahshur, the Bent Pyramid was the second pyramid built by Pharaoh Sneferu. The pyramid has a unique and mysterious structure, as its base rises from the desert floor at an angle of 55 degrees and then shows an obvious change of a more gradual angle of 43 degrees, which gives the pyramid its bent shape. 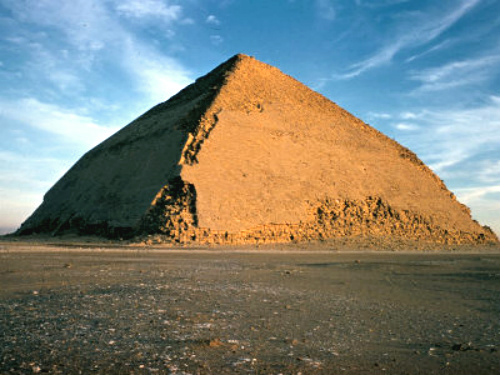 Archaeologists hold the theory that due to the abruptness of the actual angle the weight to be added above the inner chambers and passageways became too large, forcing the builders to adopt a shallower angle. The Bent Pyramid is believed to be the transition between the steps sided and the smooth-sided pyramids.

The Pyramid of Djoser, also known as the Step Pyramid, is located at the Saqqara necropolis northwest of Memphis. The Step Pyramids is known to be the very first pyramid built by the ancient Egyptians. The pyramid was built as a tomb, which features a vast mortuary complex in a huge courtyard, constructed for the burial of Pharaoh Djoser by his Vizier Imhotep in the 27th century BC. 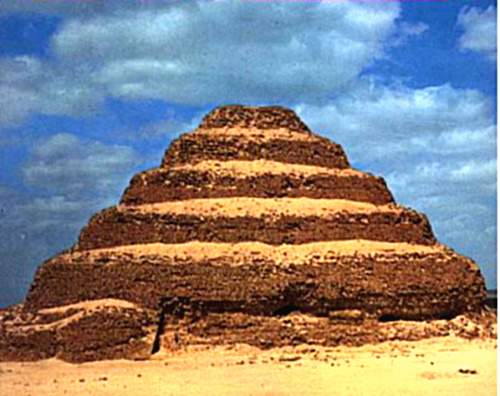 The pyramid stands 62 meters from the ground and is made of six mastabas built on top one another. Like the earlier tombs, the burial chambers of the Pyramid of Djoser are underground, hidden in a maze of tunnels.

The Ancient Egyptian Temple complex, the Luxor Temple is located on the east bank of the River Nile in the ancient city of Thebes, which is now known as Luxor and lies on the east bank of the River Nile. It was founded in 1400 BC during the New Kingdom. The temple, known to be the southern sanctuary, was bestowed upon the three Egyptian gods Amun, Mut, and Chons. The festival of Oput was celebrated each year at the ancient temple of Luxor. During the annual festival the statues of the three Gods were paraded to the temple along the avenue of sphinxes that connect the 2 temples. 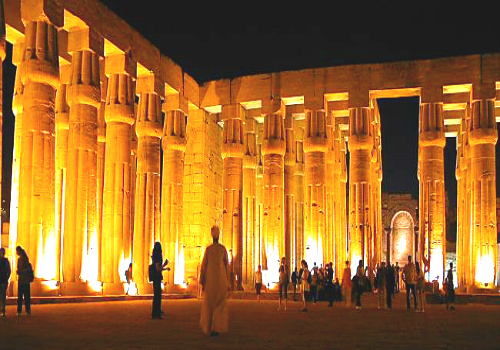 Located at the Giza Plateau on the west bank of River Nile, The Great Sphinx is one of the largest and most ancient monuments in the world. It is the largest monolith statue, made of limestone and standing 20.22 meters high. The construction of the Great Sphinx is believed to be done during the reign of Pharaoh Khafre of the Old Kingdom. 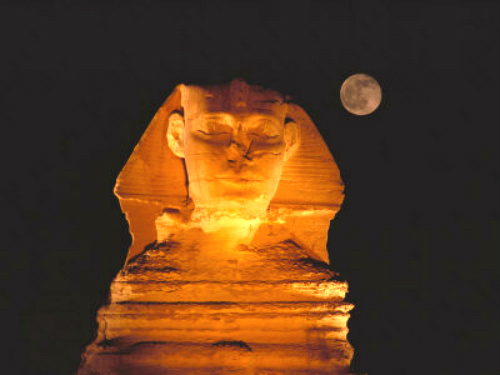 How to build muscle the right way

It is still debated that which pharaoh makes the face of the Great Sphinx. In spite of contradictory data and viewpoints over the years, the view established by modern Egyptologists remains that the Great Sphinx was built in approximately 2500 BC.

Also known as the North Pyramid, the Red Pyramid is the largest of the three major pyramids located at the Dahshur necropolis. The pyramid got its name because of the rusty reddish hue of its stones; it is the third largest pyramid of Egypt. Built by Pharaoh Sneferu of the Old Kingdom, the Red Pyramid was first successful attempt at constructing a smooth-sided pyramid. 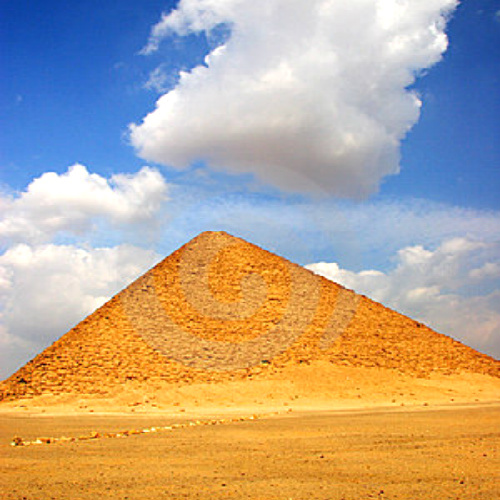 The Red Pyramid was the first tallest man-made structure, being 104 meters tall. The Red Pyramid was closed to tourists because of a nearby army camp. It is now normally open for tourists and a somewhat invasive ventilation system has been installed which pipes air down the entrance shaft to the interior chambers

4. Valley of the Kings

The Valley of the Kings is a valley on the west bank of the River Nile, opposite Luxor. It is the final resting place of many kings and privileged nobles of the New Kingdom. The site consists of two valleys, the East Valley where majority of the royal tombs are situated, and the West Valley. 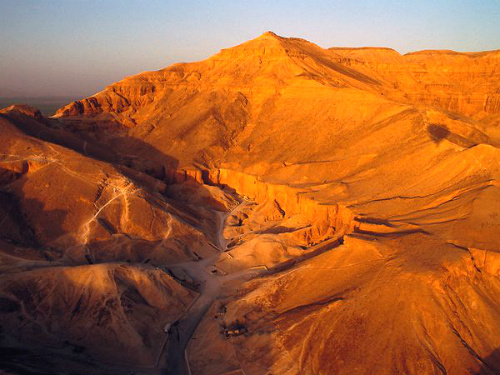 The tombs were constructed in the Valley of the Kings from the 16th to 11th century BC, nearly 500 years. Together the two valleys contain 63 tombs and chambers, with their sizes ranging according to ranks, from a simple pit to a complex tomb of 120 chambers. The tombs of the kings and the royal family are decorated with hieroglyphics from the Egyptian mythology that suggests the beliefs and funeral rituals of the period. Except the famous tomb of Tutankhamun, all of the other tombs have been opened and robbed, but they still give an idea of the supremacy of the rulers of the time.

The two massive rock temples, Abu Simbel is an archaeological site located on the western bank of Lake Nasser, in southern Egypt. The twin temples are a part of the UNESCO World Heritage Site. Originally carved out of the mountainside during the reign of Pharaoh Ramesses II in the 13th century BC, the Abu Simbel Temple was a lasting monument by the Pharaoh to his Queen Nefertari. 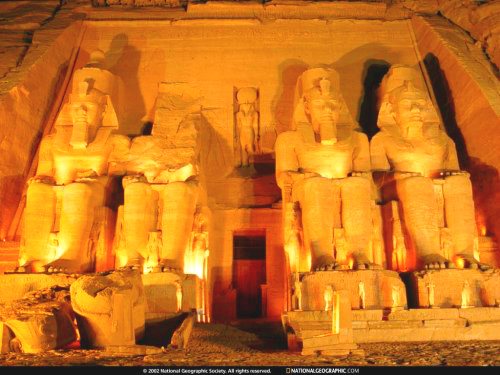 In 1960, due to fear of the temples being submerged during the construction of Lake Nasser, the complex was relocated to higher grounds, about 65 meters higher and 200 meters away from the river. The Abu Simbel Temple still remains Egypt’s top tourist attraction.

The Karnak temple is a complex of many ruined buildings, temples, pylons and other decayed structures. Even though the Karnak is now in poor condition, a very few sites of the ancient Egypt can ever be more impressive than Karnak. The temple is a massive structure whose construction began at the time of the Pharaoh Ramses II. The oldest and largest ancient religious site, Karnak signifies the accomplishment of generations of Egyptian builders that worked on it. It is located near Luxor, 500 km south of Cairo. 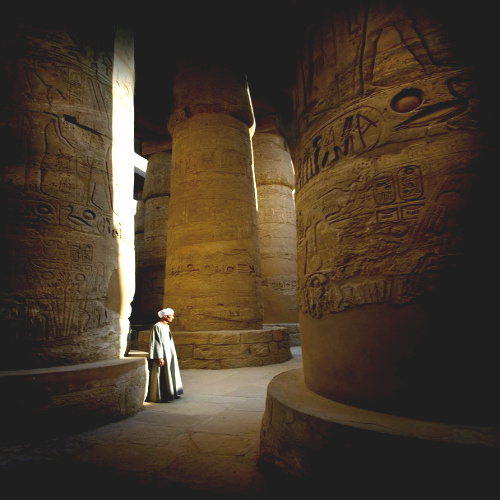 Karnak was constructed around 1570-1100 BC and consists of three main temples, some small enclosed temples and several outer temples that located approximately 2.5 km north of Luxor. The most famed structure of the Karnak is the Hypostyle Hall with an area of 5,000 sq. meters, having134 massive columns arranged in 16 rows. 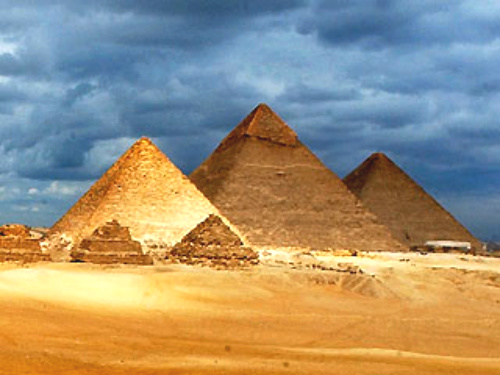 The great Pyramids of Giza were constructed to house the tombs of three powerful pharaohs, who reigned from about 2550 to 2470 BC. Without the help of modern technology, slaves piled up over 6 million limestone and granite blocks, some weighing more than 40 tons. A new block was placed within every 2 minutes and the entire project was completed in 80 years.