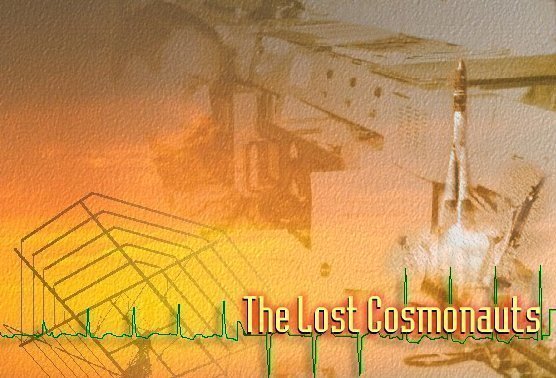 The Lost Cosmonauts, or Phantom Cosmonauts, are cosmonauts who allegedly entered outer space, but whose existence has never been acknowledged by either the Soviet or Russian space authorities.  Proponents of the Lost Cosmonauts theory concede that Yuri Gagarin was the first man to survive in space travel, but claim that the Soviet Union attempted to launch two or more manned space flights prior to Gagarin's, and that at least two cosmonauts died in the attempts. Another cosmonaut, Vladimir Ilyushin, is believed to have landed off-course and been held by the Chinese government.

The Russian government deliberately nipped this information in order to avoid bad reputation or to prevent bad publicity during the era of the Cold War. In the 1980s, American journalist James Oberg researched on space-related disasters but found no evidence of these Lost Cosmonauts. Since the collapse of the Soviet Union in the early 1990s, much of information was not accessible. 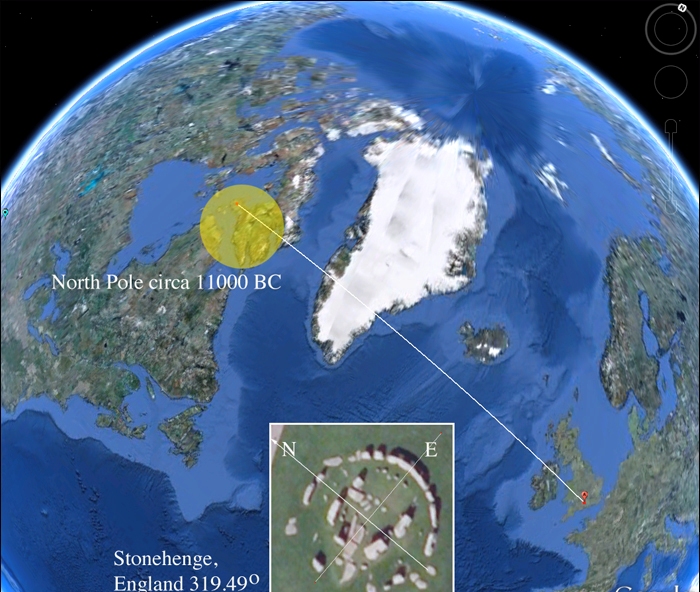 The cataclysmic pole shift hypothesis is always discussed in the context of Earth, but other bodies in the Solar System may have experienced axial reorientation during their existences. Among the scientific community, there is no research that indicates a rapid change in the position of the rotational axis. There is evidence of precession and changes in axial tilt, but this change is on much longer time-scales and does not involve relative motion of the spin axis with respect to the planet. 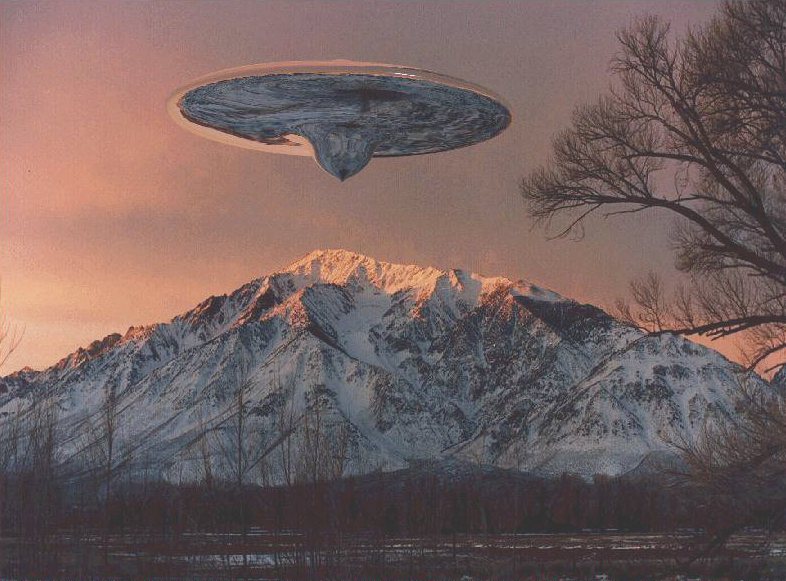 Majestic 12 also known as Majic 12 and Majestic Trust is the code name of a secret team of scientists, military leaders, and government officials, supposedly formed in 1947 by an executive order of U.S. President Harry S Truman. The alleged purpose of the committee was to investigate UFO activity in the aftermath of the Roswell incident – the crash of the alien spaceship near Roswell, New Mexico, in July 1947. The FBI has concluded that documents associated with the Majestic 12 committee are “entirely bogus”.

Although the Special Group was not specifically concerned with UFOs, and post-dates the alleged creation of MJ-12 in 1947, the commonality of the number '12' in the names of the two groups is cited as fascinating, as is the first chairman, Gordon Gray, being one of the alleged MJ-12 members. As the highest body of central intelligence experts in the early Cold War era Special Group certainly would have had both clearance and interest in all matters of national security, including UFO sightings if they were considered a real threat. 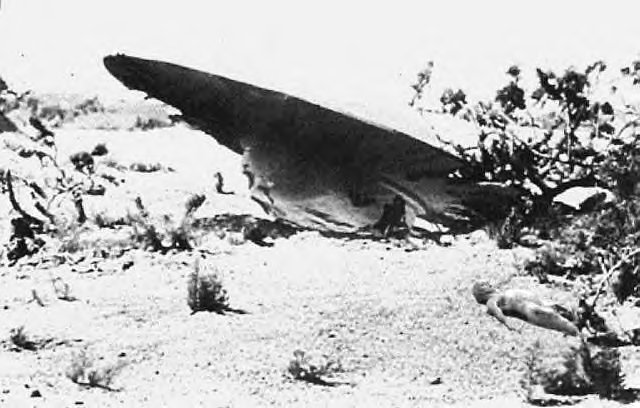 The incident of UFO Roswell was the alleged recovery of extra outer- space debris, including alien corpses, from an object which crashed near Roswell, New Mexico, in June or July 1947. Since the late 1970s the incident has been the subject of intense controversy and the subject of conspiracy theories as to the true nature of the object which crashed.

The US military maintains that what was actually recovered was debris from an experimental high-altitude surveillance balloon belonging to a classified program named “Mogul”; however, many UFO proponents maintain that in fact a crashed alien craft and bodies were recovered. The incident has turned into a widely known pop culture phenomenon, making the name Roswell synonymous with UFOs. It ranks as one of the most publicized and controversial alleged UFO incidents 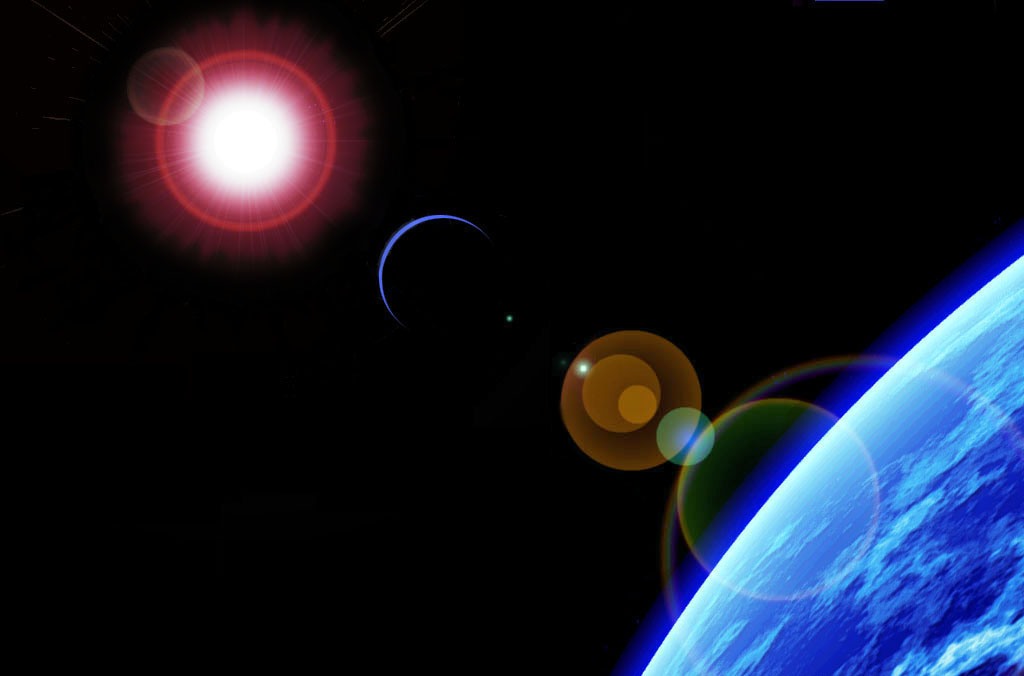 After the discovery of the Neptune planet in 1846, there were considerable speculations that another planet might exist beyond its orbit. The search began in the mid-19th but completed at the start of the 20th century with Percival Lowell's quest for Planet X. He proposed this hypothesis to explain apparent discrepancies in the orbits of the gas giants, particularly Neptune and Uranus, speculating that the gravity of a large unseen ninth planet could have troubled Uranus enough to account for the irregularities.

Clyde Tombaugh's discovery of Pluto in 1930 appeared to validate Lowell's hypothesis, and Pluto was officially considered the ninth planet until 2006. In 1978, however, Pluto was found to be too small for its gravity to affect the gas giants, resulting in a brief search for a tenth planet. The search was largely abandoned in the early 1990s, when a study of measurements made by the Voyager 2 spacecraft found that the irregularities observed in Uranus's orbit were due to a slight overestimation of Neptune's mass.

After 1992, the discovery of numerous small icy objects with similar or eve

n wider orbits than Pluto led to a debate over whether Pluto should remain a planet, or whether it and its neighbors should, like the asteroids be given their own separate classification. Although a number of this group was initially described as planets, in 2006 the International Astronomical Union reclassified Pluto and its largest neighbors as dwarf planets, leaving only eight planets in the Solar System 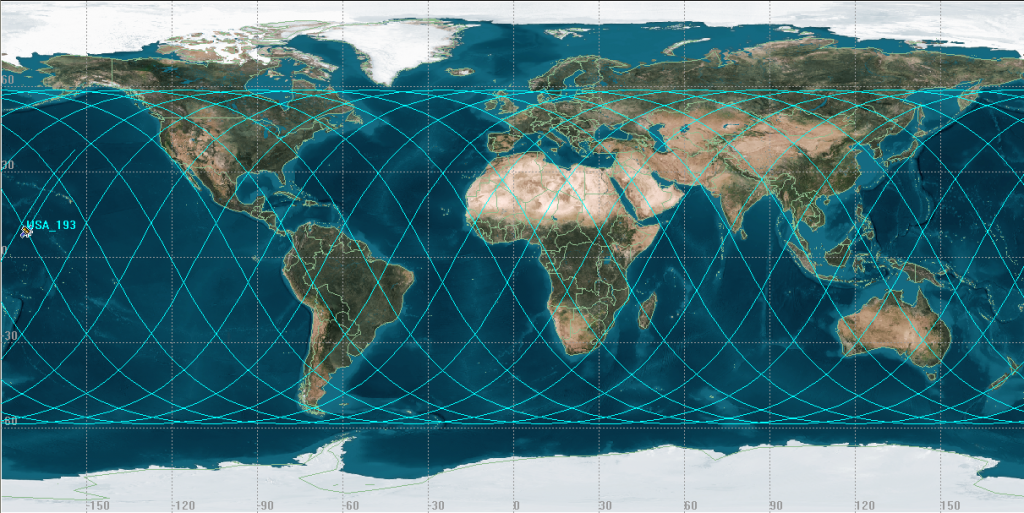 USA-193, also known as NRO launch 21 was an American military spy satellite launched in December 2006. The satellite malfunctioned shortly after deployment, and was deliberately destroyed 14 months later in February, 2008, by a modified, $9.5 million SM-3 missile fired from the warship USS Lake Erie, stationed west of Hawaii. The event highlighted growing distrust between the US and China, and was viewed by some to be part of a wider “space race” involving the US, China and Russia.

The Russian government claims that this exercise was a test of the US missile defense program. The defense ministry of Russia accused America of using the hydrazine worries as a cover for a test of an ASAT, and noted that extraordinary measures had never before been needed to deal with the many spacecraft that had fallen on Earth.  According to General Kevin P. Chilton, when President Bush was briefed on the situation, the danger that shooting down the satellite would be perceived as an ASAT test was brought up, and President Bush made his decision based on the dangers of an uncontrolled reentry.

The Flat Earth Society also known as the International Flat Earth Society is an organization that seeks to further the belief that the Earth is flat rather than a sphere. Samuel Englishman founded this modern organization in 1956, and later led by Charles K. Johnson, who established the organization in his home in Lancaster, California. The formal society was not active after Johnson’s death in 2001, but was recently resurrected by its new president Daniel Shenton.

Due to Shenton's interest in alternative science and technology the emphasis on religious arguments was less than in the predecessor society. This was just before the launch of the first artificial satellite and when satellite images taken from outer space showed the Earth as a sphere rather than flat, the society was undaunted; Shenton remarked: “It's easy to see how a photograph like that could fool the untrained eye.” However it was not till the advent of manned spaceflight that Shenton managed to attract wide publicity, being featured in the New York Times in January and June 1964, when the epithet “flat-earther” was also slung across the floor of the House of Commons of the United Kingdom in both directions

3. The Face on Mars (the Cydonia region) 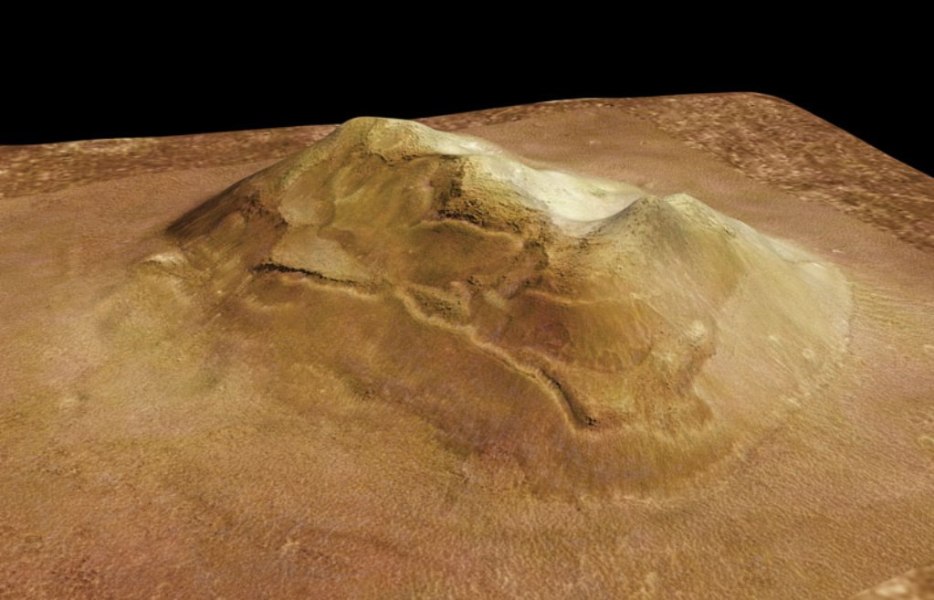 Cydonia is a region of Mars containing several hills which has attracted attention because one of the hills resembles a human face, while others resemble pyramids. The phenomena have attracted both scientific and popular interest. The name originally referred to an albedo feature that was visible from earthbound telescopes.

As with other albedo features on Mars, the name Cydonia was drawn from classical antiquity, in this case from Cydonia, a historic polis on the island of Crete. Cydonia lies in the planet's northern hemisphere in a transitional zone between the heavily cratered regions to the South, and relatively smooth plains to the North. Some researchers believe that the northern plains may once have been ocean beds and that Cydonia may have been a coastal zone. 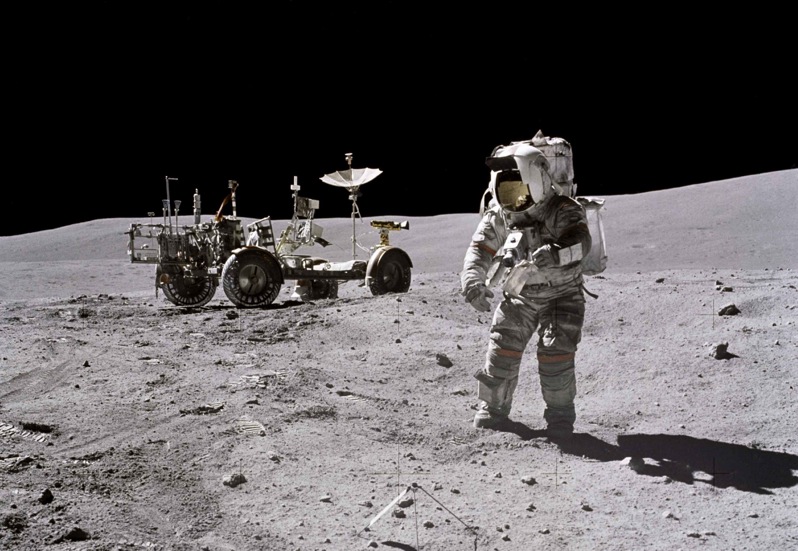 Regarding landing on moon there are different conspiracy theories that some or all elements of the Apollo Project and the associated Moon landings were false staged by NASA and members of other organizations. Since the conclusion of the Apollo program, a number of related accounts espousing a belief that the landings were faked in some fashion have been advanced by various groups and individuals.

Some of the more notable of these various claims include allegations that the Apollo astronauts did not set foot on the Moon; instead NASA and others deliberately  deceived the public into believing the landings did occur by manufacturing, destroying, or tampering with evidence, including photos, telemetry tapes, transmissions, and rock samples. Such claims are common to most of the conspiracy theory. Various polls have shown that 6% to 28% of the people surveyed in various locations do not think the Moon landing happened. 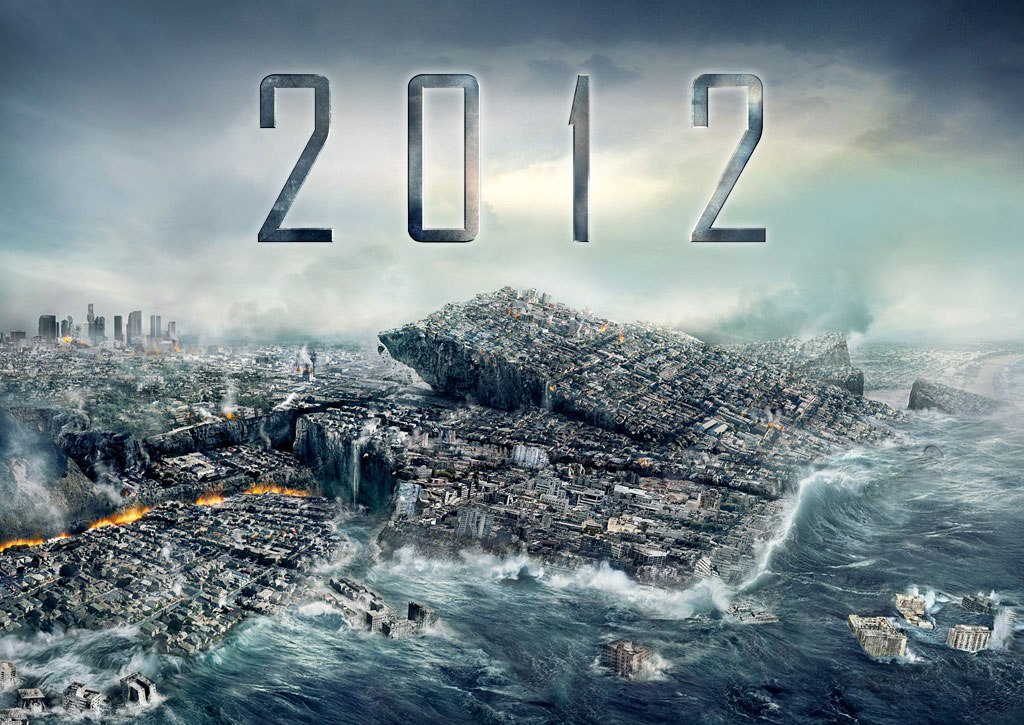 The 2012 phenomenon comprises a range of eschatological beliefs that cataclysmic or transformative events will occur on December 21, 2012, which is said to be the end-date of a 5,125-year-long cycle in the Mayan Long Count calendar. Various astronomical alignments and numerological formula related to this date have been proposed, but none have been accepted by mainstream scholarship.  A New Age interpretation of this transition shows that during this time Earth and its inhabitants may undergo a positive spiritual or physical transformation, and that 2012 could be the start of a new era.

Others say the 2012 date marks the end of the world or a similar catastrophe like shown in Hollywood’s popular$ movie ‘2012’. Scenarios posited for the end of the world include the Earth's collision with a passing planet (often referred to as “Nibiru”) or black hole, or the arrival of the next solar maximum.  Scholars from various disciplines have dismissed the idea that a catastrophe will happen in 2012, stating that predictions of impending doom are not found in any of the existing classic Maya accounts.