Top 10 Dangerous Roads of the World

most dangerous roads around the world we have heard about them. There are various factors for being these roads most dangerous.

Nature has created the borders that shouldn’t be crossed using huge rocks, steep slopes, stones, volcanoes but the human beings were so stubborn that they finally constructed the roads, but what we still can’t do is to ensure the safety. 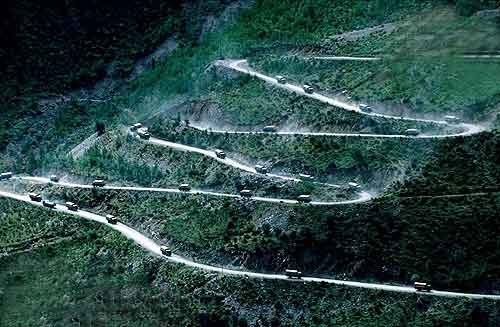 China’s high-altitude Sichuan – Tibet Highway covers about 1,500 miles between Chengdu in the east and Lhasa (Tibet) in the west, offering the choice between the northern or southern route. Both options enhance beautiful scenery, extensive mountain peaks, various historical and cultural attractions, and many famous rivers. Que’er Mountain pass, is considered to be the highest point on the route, rises to over 20,000 feet.

Like many other roads that cut through mountains, the Sichuan – Tibet Highway is prone to landslides, falling rocks, and extreme weather conditions that can close the road for a month at a time. Huge avalanches and altitude make your driving conditions unsafe. you wouldn’t want to be part of the local breakdown cover company! It’s certainly a great route for sightseeing, along with making your driving a thrill. 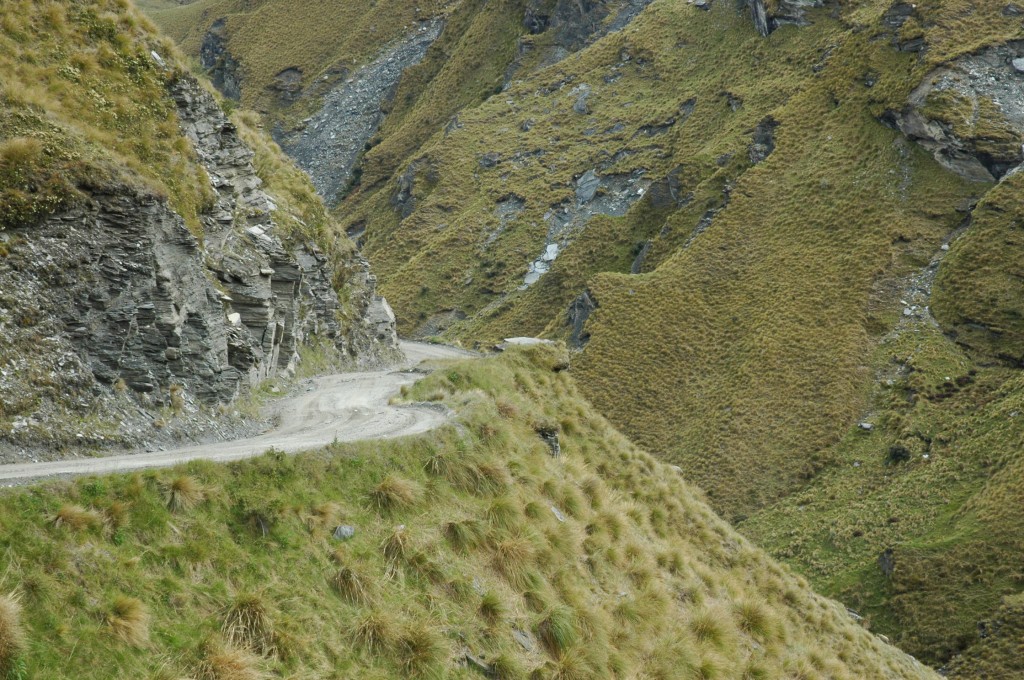 According to historians, a couple of shepherds in 1862 discovered gold in the Shotover River near Queenstown, New Zealand. This necessitated the creation of an access route, and eventually the result was in construction of Skippers Road, a narrow, winding, and impassable pathway that twists and turns for about 16 ½ miles through Skippers Canyon.

Skippers Road took 22 years to complete with blasted of the solid rock by Chinese laborers, and there is not much difference today than it was first created. In most places the road is too narrow for vehicles to pass each other; there are no guardrails, and retaining walls leaving absolutely no room for any negligence. 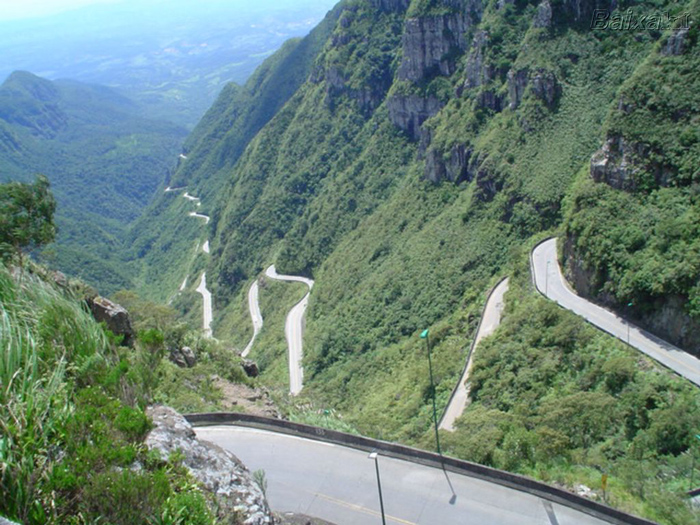 Located on the island of Luzon, the Halsema Highway passes through the Central Cordillera Valley in the Philippines from Baguio to Bontoc and farther on toward Tabuk and Tuguegarao. Land sliding and rock fallings are common and frequent, usually making motorists stranded for a long periods of time. Many portions of the road are still unpaved, although work is apparently in progress to bring about some improvements, and there are a large number of drop-offs that are steep enough to kill a traveler. Foggy conditions with the lack of required guardrails in certain areas make the Highway more dangerous which is already in dilapidated condition.

In the mountainous region of Greece, the route connecting Patiopoulo and Perdikaki is considered to be very dangerous that require constant care and attentiveness from their travelers. Potholes and loose, slippery gravel weaken a driver’s control while distractions from heavy traffic, pedestrians, and livestock create additional hazards. Many sections are very narrow and steep demanding the utmost of caution while travelling on this road. 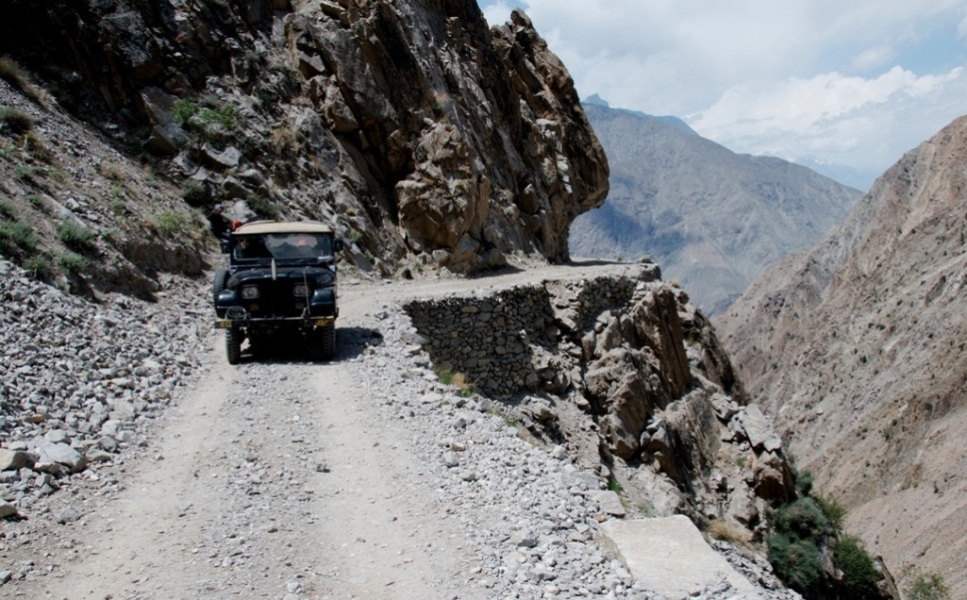 Fairy Meadows is situated at the base of Nanga Parbat Pakistan at the altitude of 26,660-feet. It is a picturesque destination for photographers, backpackers, and mountain climbers who want to get closer to the lofty peak and enjoy the scenery. However, getting to Fairy Meadows, is not such an attractive experience as part of the trip involves surviving a 6-mile, hour-long drive on an unstable narrow road hacked out of the barren hills.

From Raikot Bridge to the village of Tato, this road offers the motorists all the features of your typical mountainside. It’s narrow, unpaved, steep, and of course there are no guardrails to prevent your Jeep from rolling down into the ravine. You can’t even drive it all the way to Fairy Meadows; the last section has to be covered by bicycle or on foot. A great road for adventurers, Fairy Meadows Road is definitely not for the faint of heart. 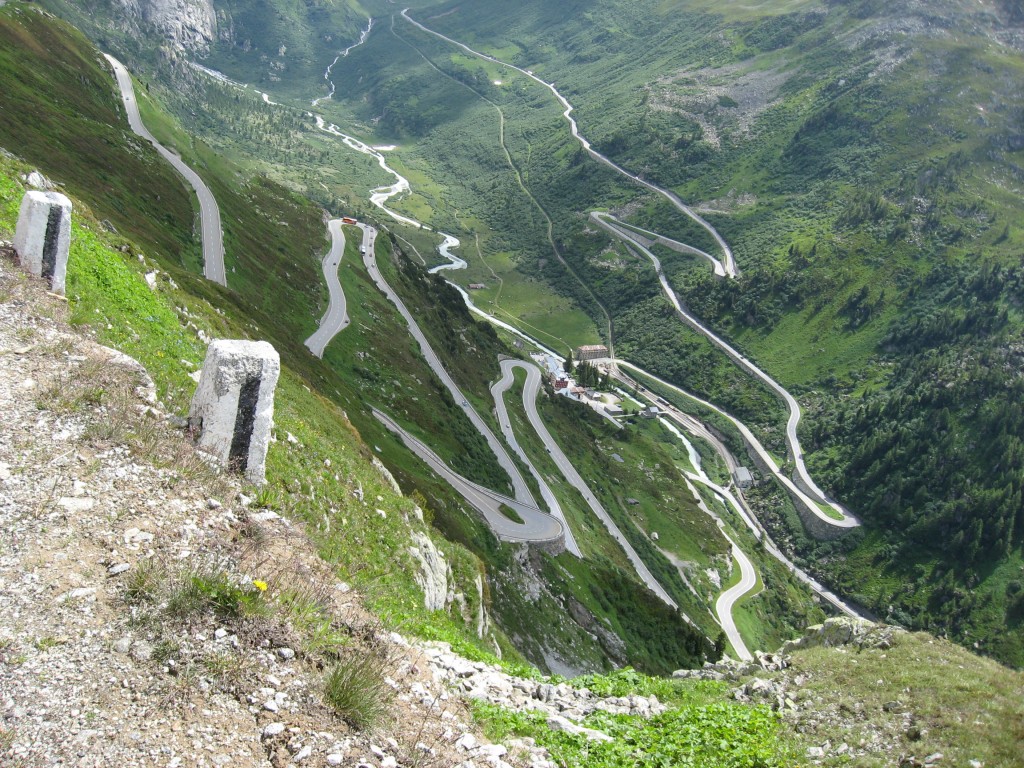 According to a travel association, Bolivia old Yungas Road is considered to be the one of most dangerous routes, which twists and turns for about 40 miles between the capital city of La Paz and the town of Coroico in the Yungas jungle region. If other roads seem risky, the old Yungas Road is nothing less than a mission impossible.

Constructed in the 1930s by Paraguayan prisoners of war, the Yungas Road was until recently the main route from La Paz to Bolivia’s northern Amazon rainforest region. Dropping nearly 12,000 feet in overall elevation, the road is extremely narrow, and frequent landslides and fog, offers no protection from the sheer cliffs that drop straight down for a couple thousand feet. Before a modernized and safer route was completed in 2006, somewhere between 100-200 casualties occurred every year, and the roadside is currently littered with memorials and crosses. For obvious reasons, locals have given it a simple nickname – Death Road. By the way, there are quite a few companies in La Paz that offer extreme bike tours of the Yungas Road for adventurers. If you want teasing death, then this is the road for you.

Stelvio Pass Road is located in Trollstigen Italy. This is an amazing road which connects the Valtellina with the upper Adige valley and Merano. It passes through the Italian Alps in nearby Bormio and Sulden, 75 km from Bolzano, close to Swiss border. It is considered a very dangerous road in the world, but if you watch it from a peak then you can find it one of the best views in the world, very awesome! It is surely breathtaking. The tour books advise that the toughest and most spectacular climbing starts from the Prato side, Bormio side. 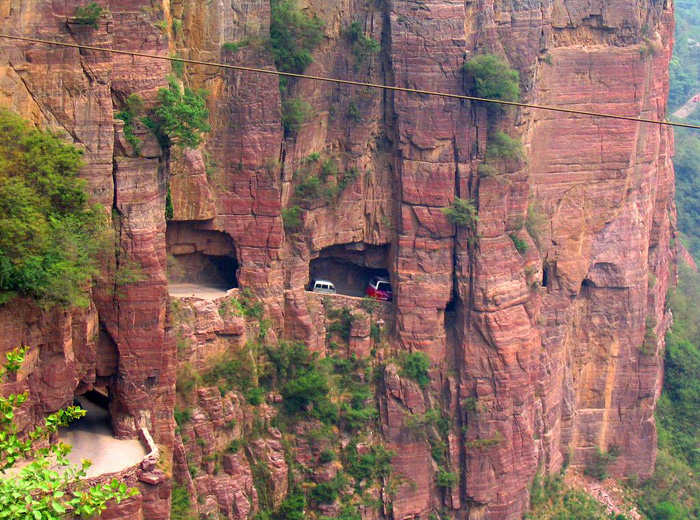 The name of the tunnel translates from Chinese as the “Road that does not bear any mistakes”. First the tunnel was created by the villagers from the remote area of the Taihang Mountains to get a way out to the outside world. Presently the road is 15 feet high and 12 feet wide which is pretty scary for the drivers. The tunnel has 30 windows to enjoy the scenes. The Guoliang Tunnel Road is carved though a mountain in China. The tunnel is located in the Taihang Mountain, which are located in the Henan Province of China. Before this road was constructed, access to the nearby Guoliang village was limited to a difficult path carved into the mountainside. The village is nestled in a valley surrounded by towering mountains cut off from civilization. In 1972 a group of villagers led by Shen Mingxin decided to carve a road into the side of the mountain. They generated money to purchase hammers and other tools. Thirteen villagers began the project. The tunnel is 1.2 kilometers long, 5 meters tall and 4 meters wide. Some of the villagers died accidently during the construction of the road and tunnel. The tunnel was opened for traffic in May 1977. 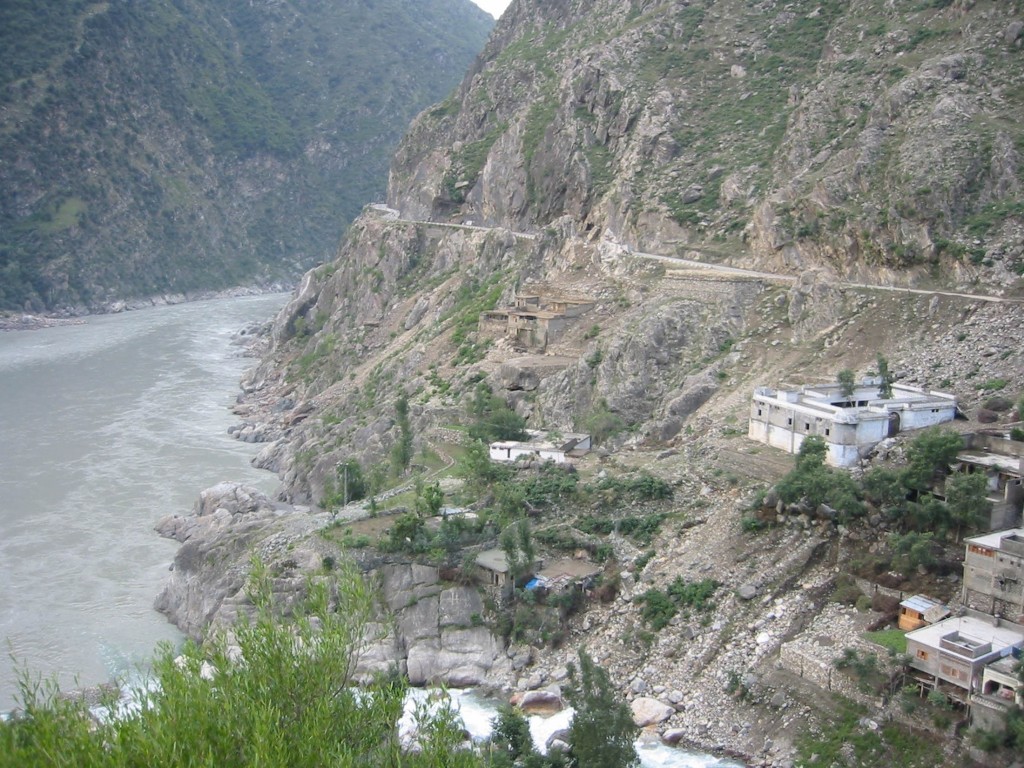 The Karakoram Highway (KKH) in Chinese: 喀喇昆仑公路 is the highest paved international road in the world is 810 Kilometer long. It connects China and Pakistan across the Karakoram mountain range, through the Khunjerab Pass at an altitude of 4,693 meter. It connects China’s Xinjian region with Pakistan’s Gilgit-Baltistan and also serves as a popular tourist route. Due to its high elevation and the difficult conditions in which it was constructed through cutting the mountain rocks, it is also referred as the “Ninth Wonder of the World and the one of the most dangerous routes of the world. 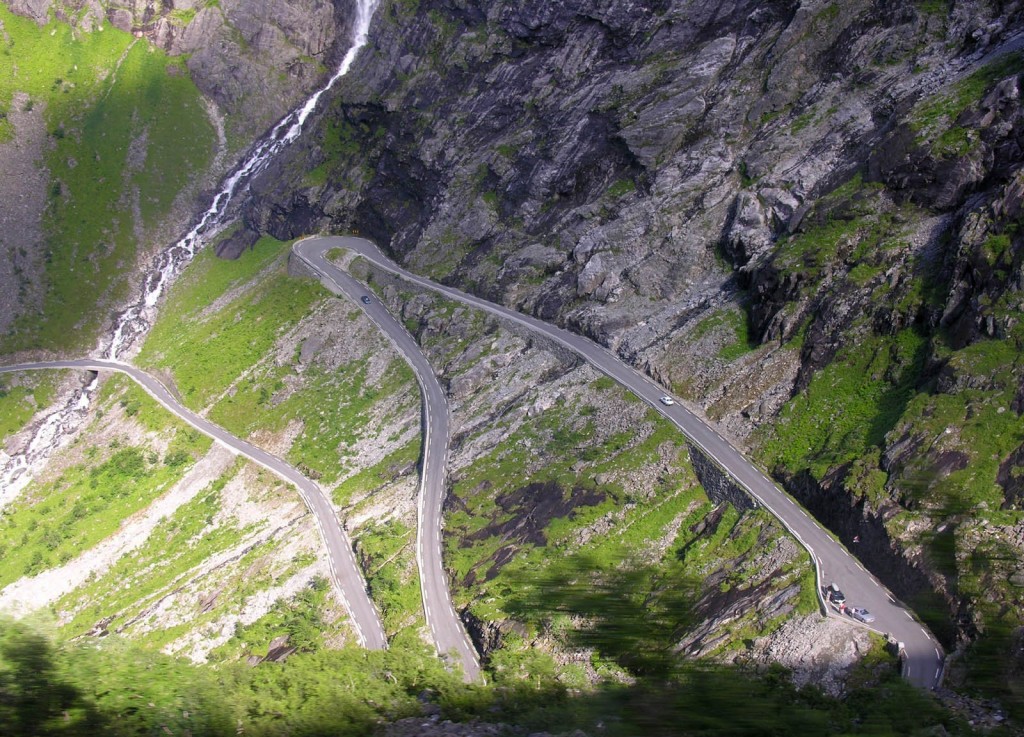 Trollstigen is located around 15 kilometres south of Åndalsnes in the county of Møre og Romsdal, north in Fjord Norway. The region consists of 25,000 inhabitants, which is the largest town in the area. Trollstigen has a steep incline of 9 percent and consists of 11 hairpin bends up a steep mountainside. Encircling the road are huge mountains. Names such as Kongen (the King), Dronningen (the Queen) and Bispen(the Bishop) confirm their majesty.

Trollstigen is a mountain road in Rauma, Norway, part of Norwegian National Road connecting Åndalsnes in Rauma and Valldal in Norddal. The road up is narrow with many sharp bends, and although it has been widened in recent years, vehicles over 12.4 meters long are prohibited from driving on this road. At the top there is a large parking place which allows visitors to leave their cars and walk for about ten minutes to a viewing balcony which overlooks the road with its bends and the Stigfossen waterfall. Stigfossen is a beautiful waterfall which falls 320 meters down the mountain side and looks a spectacular view for the travelers.