The Hunger Games movie was directed by Gary Ross and it is based from the novel The Hunger Games by Suzanne Collins. John Kilik and Nina Jacobson produced the film and Ross, Billy Ray and Collins did the screenplay. The main starts of the Hunger Games include Jennifer Lawrence, Liam Hemsworth, Josh Hutcherson, Elizebeth Banks, Donald Sutherland and Woody Harrelson. The Hunger Games takes place in the future and Panem is the nation of where they are located. In the movie 12 boys plus 12 girls participate and join in from the Hunger Games. The event is done on television. The ones that participate are called tributes and they have to fight until the death and there is one victor that remains. Katniss Everdeen is the protagonist and gets horrified when her young sister is called and Katniss takes her sister's place. Peeta Mellark is the mail tribute from the district. Together they train and they get ready for the Hunger Games. Internationally the film was released on March 23rd, 2012. Here are ten odd facts about the Hunger Games Movie that you might know. 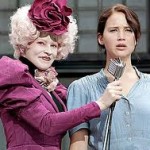 Elizabeth Banks had to be transformed into the famous Effie and in order for them to transform her into Effie it took them around two and a half hour to do it. Instead of getting her nails done she decided to wear gloves but if she would have gotten her nails done then that would have added on another 45 minutes of getting ready. Effie looked unique and ready to act by the time they actually got everything done. It was indeed a wonderful and odd transformation.

Amandla Stenberg played Rue in the Hunger Games. She was born in Los Angeles, California and started doing modeling shoots for Disney when she was just four years old. She has appeared in commercials for Kmart, McDonald's and many more. Before Amandla Stenberg got the part of Rue she said that she loved The trilogy of the Hunger Games long before everything happened.  She also said that her mother took a few of the clothes that she had and then rolled them up in their backyard. She also put in some dirt plus grass. Her mother was smart and also added in twigs plus leaves so it looked like she had been out in the woods. Gary was really impressed when they met up and said she had her very own hair and makeup department.

8. Jennifer Lawrence Only One That Could Play Katniss

Jennifer Lawrence was born on August 15th, 1990 and is a popular actress on television and had leading roles in The Bill Engvall Show and a few others. When Jennifer Lawrence was not acting she was busy with cheer leading and was a cheerleader for at least six years. Jennifer Lawrence was currently playing the lead for Savages. In order for her to do the Hunger Games she dropped out of it. Collins felt that Lawrence really was the only one that was able to really capture the character for Katniss because she was mature.

cked Josh Hutcherson by accident and when that happened he got knocked out and had a concussion as a result of the kick. Thankfully he did have a quick recovery and was able to get back into the scene of things fast without a lot of time wasted.

Jennifer Lawrence and Lenny Kravitz knew each other before the movie Hunger Games. Back in the year 2011 they appeared in the movie X-Men:First Class and they got along great together. It's always fun when you already know people on the scene.

You don't see Caesar Flickerman for long periods of time in the Hunger Game. Caesar Flickerman was played by Stanley Tucci and is a writer, American actor, film director and he is also a film producer. He did a remarkable performance in the movie Winchell and won an Emmy Award for it. The one thing that stands out to people the most is the blue wig that he had on but do you know about the rest of the outfit? He not only had a bright blue wig but he also had on fake teeth, blue eyebrows, spray tan plus he had on a lot of makeup.

Many of the actors in the Hunger Games wore wigs or additional hair pieces in the film. One actor that did not was Wes Bentley who played Seneca Crane. He might look very weird with his hair but believe it or not that beard and hair is his own. He was not wearing anything fake in the Hunger Games.

3. Prim's Pets In The Movie 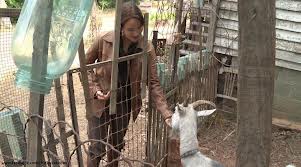 Prim is not like her sister in many ways. She has a talent that is very special because her gift is healing. She has blonde hair that looks just like her mother and her mother also has this special talent. What people might not know from watching the first movie or either that they forgot about is that Prim actually has two pets. She has a cat that she named Buttercup and she also has a goat that she named Lady. The goat helps with providing both milk and cheese to their family. Katniss was the one that actually saved the goat and then she gave it to her sister on her tenth birthday.

2. The Mother of Katniss

Paula Malcomson is a known actress and worked with Jennifer Lawrence in the past before. Back in the year 2003 there was an episode called Cold Case and she worked as the mother of Lawrence before. The character that she played in Cold Case was about a mother that was homeless and struggling with being able to support both of her children after their father died so it's not surprising that she was able to do so well in the Hunger Games as the mother to Prim and Katniss.

Alexander Ludwig took his role very seriously in the Hunger Games as Cato. He is a Canadian actor and was born on May 7th, 1992. He played as one of the career tributes. In order to stay in shape he had to work out for at least four hours per day and a US Navy Seal helped to get him into shape plus he had to gain 40 pounds for the role. He did a fantastic job with getting into shape.