The Top Ten Cool Weapons Used In The Hunger Games

In the Hunger Games trilogy you will noticed that there are lots of weapons used throughout the movie. When they are at the Cornucopia they are supplied with a lot of them. They also need the weapons because of the bloodbath that happens in the first part of the movie. If a tribute does not have a weapon usually this means that they would have to fight and get them from another tribute and often times this would result in hand battles. Sometimes weapons would be given as a gift by their mentors or either from the district. A lot of the weapons in the Hunger Games would be made of either black hilts or metal that was silvery. Holes would be in them in order to attain a weight that was light. Here are the top ten cool weapons used in the Hunger Games. 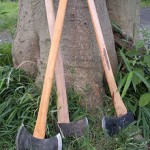 Johanna Mason in District 7 would be using the axe because the focus on her district is lumber. The female tribute from district 1 was close to defeating Haymitch Abernathy and threw the axe at him but he quickly dodged the axe. The field of the force that surrounded the area actually caused her axe to fly back and when it did the axe killed her. Haymitch was the victor because of it.

Light darts or either projectiles can be fired when using the blowgun. Maysilee Donner was able to get 24 darts that was located in the Cornucopia. She dipped the darts in a variety of substances that was poisonous. Maysilee was able to help save Haymitch from the Career Tribute because the tribute was close to killing him. When that happened the two of them started to become allies until it got down to the last five.

The dagger is a knife that is double edged and can be used for fighting and many other things. It is not the same as a knife that has the double edged blade with it. The knife is also a tool and can be used for silverware. Marvel had the dagger and killed the District 8 boy when the bloodbath was happening and just slashed him. Marvel had a lot of daggers that he carried in the backpack. Gloss was the male tribute that was from District 1 and he used the dagger. He slit the throat of Wiress at the Cornucopia with the dagger.

I'm sure that all of us remember the Gamemakers using Fire as a weapon because they injured Katniss's leg by using the fireball. They had a plan to try and cause distance from Katniss and from the Career Pack. If needed, they would have killed Katnis with the fireball. However, when she was injured she did receive medication from her mentor and her leg healed very fast.

can be said about the knife is that the blade is very sharp. It can also be either double or single sided. It can be used as a tool, silverware or either a weapon so a knife can come in handy. Most people remember Katniss using the bow but she did use a knife when she killed Clove. The knife was in her backpack and that was her very first weapon that she used. Peeta Mellark also liked knives along with Clove and Haymitch. Glimmer also used a knife and killed the female in District 10 in the bloodbath. Rue also took  Cato's knife in training but he did not know that she did it.

You will see a pod in the Hunger Games. It is an obstacle that is created and can range from a variety of things such as mutts and bombs. The pod was designed in order to trap and kill. The Capitol created the pods and deployed the pods throughout the game and used them as traps. 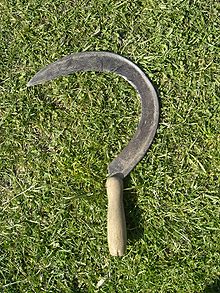 Sickle is the handheld tool which is used as a weapon. Sickles can be used for both cutting and slashing. They are silver and the blades on them are curved. The sickle appears in the Cornucopia. The District 3 female was killed by the male in District 5 and slashed her throat with it. The District 11 male tribute used it on the District 7 male’s neck and left a mark on his throat. 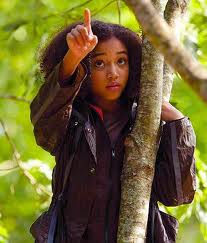 Slingshots can be used as a weapon that is projectile. It can fling objects that are small like stones. Rue is a skilled slingshot user and can hit almost any target accurately. When she was able to flee from the Cornucopia she used the slingshot as her weapon of choice.

The bow and arrow is common and known in a lot of cultures and it's a projectile weapon. Katniss uses the bow in order to hunt for food. In the arean she uses the bow as her weapon of choice. Another archer that is skilled is Gale Hawthorne because Katniss taught him. The District 6 female and Glimmer also have archery skills.

I am sure that we all remember what happened with Rue because of the net. A net can also be used to catch animals, birds and fish but mainly in the Hunger Games it was used to ensare people. District 4 would use the net for fishing. Katniss fell and went into the wire that was coiled and she thought that she had fallen into the net of Finnick and this made her believe that both Johanna and Finnick were out to kill her.