Something that many people in the USA enjoy is a nice hamburger. These days you can find all sorts of hamburgers topped with almost any kind of ingredient that you can imagine. The normal hamburger usually is served with ingredients such as lettuce, tomato, bacon, pickles, onions, mustard, ketchup, cheese, mayonnaise and sometimes relish. The name hamburger actually comes from Hamburg Germany. Burg stands for a settlement that is fortified or either a refuge that is fortified. Hamburger is also known as a noun that is descriptive in German and often times it is referring to someone that was from Hamburg. A lot of people in Hamburg immigrated to the USA. In 1890 was when the very first hamburger was created. The origin of the hamburger remains unclear. White Castle claims that Otto Kuase invented the hamburger back in 1891 when he created a special beef patty and cooked it in some butter then topped it off with a nice fried egg. There are several stories of people inventing the hamburger. Today you can find hamburgers at fast food restaurants throughout the USA and most of them are served with fries. Here are the top ten cool hamburger joints in the USA. 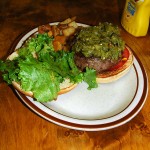 If you would like to have a unique cheeseburger then you should try out the green chile cheeseburgers that you can only find at Bobcat Bite in NM. Back in 1953 the Bobcat Bite opened. They have some incredible hamburgers that  you will never forget. They do have other things to eat at the Bobcat Bite such as pork chops and steaks but the one thing that many people go there for is the nice spicy green chile roasted strips with some cheddar cheese on it. The owners say that the Bobcat goes thru 200 pounds of beef every day. If you are in the mood for a great cheeseburger then this is the place to visit.

One thing that the  Billy Goat Tavern & Grill is famous for is there hamburgers. They have a burger bar and you can top it off with all of the pickles that you want on it. If you are on a budget then this is one of the best places to eat and grab a great hamburger. It's also very fast and they work hard to make sure that you get your hamburgers quick so you won't have to wait to eat. Something else that they have there that many people like is the Polish sausage sandwich so if you're not in the mood for a hamburger but would like to have a sandwich then be sure that you try it out.

The Minetta Tavern is a restaurant that is nice and cozy. They are famous for the black label burger. It's very tender and it's made with at least 50% rib-eye. The onion is caramelized and when you bite into it the hamburger just melts in your mouth. The Minetta Tavern is also known for their awesome cocktails and dessert. Many people make the mistake and they don't leave room for dessert but when you are there be sure that you leave room for it.

m comes around it's one hour that you will never forget. Two bull horns start ringing and at least two dozen of beef burgers get brought out and they are literally up for grabs. They get sold out of the hamburgers very fast. The Sunday Brunch Menu at the Holeman & Finch also has the hamburgers but whenever they have them be sure that you order one ahead of time or you might just miss out on them.

McDonald's is one of the biggest hamburger fast food chain restaurants within the USA and they are also located in other countries throughout the world. The company started back in 1940 and it was first a barbecue restaurant and Richard and Maurice McDonald operated it. Now McDonald's serves hamburgers, chicken, cheeseburgers, french fries, milkshakes and even breakfast. They are known for their Big Mac hamburger, fish hamburger and now you can get a nice Angus hamburger at McDonald's.

The Shake Shack is one of the best chain restaurants that serves very good hamburgers. It also servers other food items such as hotdogs and milkshakes. They have something for everyone. Currently they have fourteen restaurants in the USA and seven them happen to be located in New York City. The double cheeseburger at the Shake Shack has a special sauce that you won't be able to find anywhere else and it taste much like thousand island dressing but it's not and it's very good. If you love cheese then be sure to check out the cheese fries with the double cheeseburger but that's not the only hamburger they have. They also have The Shroom Burger and lots of other tasty hamburgers.

The Five Guys is another restaurant chain that is growing fast. It is known for their hot dogs but mainly for their hamburgers. The Five Guys offers a wonderful Bacon Cheeseburger that has American cheese on it. They also have vegetable sandwiches and grilled cheese. They also offer some yummy complimentary peanuts.

Red Robin is also known as Red Robin Gourmet Burgers. It was founded back in the year 1969 and they are a casual chain dining restaurant. They have over 400 restaurants in the USA and they also have restaurants in Canada. They have some incredible hamburgers such as the Tavern Double, Red Robin Gourmet Cheeseburger, All American Patty Melt, Back Cheeseburger, Guacamole Bacon Hamburger, The Veggie Hamburger, Whiskey River BBQ Hamburger, Crispy Arctic Cod Sandwich hamburger and many other incredible hamburgers.

The In-N-Out Burger is another fast food regional chain restaurant. They first only had a place in California but now they have expanded and they have locations in Arizona, Texas, Nevada and in Utah. The In-N-Out Burger is working hard with trying to continue with expanding. They have a wonderful double double cheeseburger and for dessert make sure that you check out their shakes. They also have a Protein Style hamburger and a few other hamburgers for you to pick from.